China has often been praised for it’s four great innovations dating back to the ancient civilizations: paper, printing, compass, and gunpowder.

Not only did these four discoveries have a large impact on the advancement of technology & science for modern civilization, but those inventions also acted as a bridge between the East and the West.

The original four great inventions were nothing to scoff at. However, with the growth of modern-day technology, will future generations be discussing another set of discoveries made in our generation? In 2017, Xinhua Net (Chinese News site) highlighted the “Four great new inventions” in the modern era: Bike-sharing, high-speed rail, e-commerce, & mobile payments.

If you’ve ever been to New York, you might have seen these blue bicycles from CitiBike (pictured above) stationed and parked together at these bicycle docks. They are practically everywhere. For a small fee, you can rent these bikes for a short while and travel around on two wheels instead of two feet. Then, where these stations are conveniently placed, you can park them away when you are done. It’s like UBER, for bikes.

In China, these bikes are also everywhere. But they aren’t docked. They look more like this:

And yes, all of these orange and yellow bikes are the property of the two largest bike-sharing companies in China, Mobike and Ofo, respectively. China’s share-bikes also take “small rental fee” to a new level. Ofo, the yellow bikes you see here launched only in 2014, charges just 1 RMB / hour. For my Canadian readers, that’s 20 cents/hour, and about 15 cents/hour in American dollars.

These share-bikes are also extremely convenient. From the picture above, you can see there is no shortage of available bicycles on the streets. Pick one up, scan the QR code with your phone to unlock (QR codes are all the rage here in China), and then bike away. When you are done, just literally park them anywhere on the sidewalk.

Cheap, convenient, and mass produced. I am honestly quite impressed by the adoption of this technology. The only downfall is quality & maintenance. 1 RMB to rent a bike also means these bikes aren’t going to be taken care of particularly well, despite the initial deposit amount of 99 RMB (~14 USD)…Though, that seems just about right for Chinese products. The reason why companies can charge such a low rental fee? Data. But that discussion will be in a later more in-depth article.

In America, Scooter startups have been all the rage, a spin-off of the bike-sharing business model. Electric Scooter Startup “Spin” recently announced they were looking to raise 125 million, and “Bird” officially raised $300 million in their latest funding round. Lyft also recently acquired bike-sharing company “Motivate”, the company behind CitiBike (the blue bikes above) and Ford GoBike. UBER is also bringing scooters and bikes to the road by partnering up with scooter rental company “Lime” and share-bike company “Jump.” Looks like the UBER vs. Lyft battle continues, but this time in the unconventional transportation world.

China didn’t technically invent bike-sharing, as the earliest documented project of bike-sharing systems date back to 1965 in Europe, where the group Provo painted fifty bicycles white and placed them unlocked in Amsterdam for everyone to freely use., However, China seems to be the quickest to jump onto the profit-business aspect of dockless bike-sharing, and 13 of the 15 largest public bike share programs are from China. If you ever come to Shanghai, you’ll see that there are more bikes on the road than cars. With over 30 startup companies and 10 million bikes across dozens of cities, China is clearly the king of dockless share bikes. 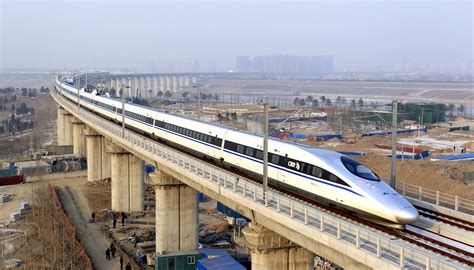 Quick and cheap— important criteria for the Chinese, and again applied to transportation.

This time, it’s the high-speed rail (HSR): trains that can travel at top speeds of 350km/hour.

By the end of 2016, China had in total 124,000-km of railway networks, which also included the world’s largest HSR network of more than 22,000 km. China had operated over 2,595 high-speed trains by 2016, which comprised of over 60 percent of the world’s total high-speed trains. Once again, easily dominating an entire industry.

I remember taking overnight trains from Beijing to Hu Nan province, a rural area of China, during my service trip in 2016. Yes, overnight train, which meant roughly a ~ 12-hour trip. I ended up sleeping 8 hours on the bunk beds.

Coming back from Hu Nan to Beijing, we took a high-speed rail instead. Total trip duration: 3-hours.

High-Speed Rail from Beijing to Shanghai: 4.5 hours. By plane, it would take a little over 2-hours, but don’t forget to factor in those extra hours of waiting in line, delays, baggage, and security.

High-speed rails are fast, efficient, clean, and on-time. Moving at 350km sounds scary, but when you are seated in those high-quality reclining chairs, you can’t even feel the train moving as you glide past half the country. It’s bliss.

What country has the largest e-commerce market? A lot of people would immediately gravitate to America, as it is the host country of e-commerce giant Amazon. Yet, e-commerce only accounts for roughly ~10% of all retail sales in the U.S., while China had over 15.5% of all retail sales made online in 2017. In 2016, online shopping in China generated 5.16 trillion yuan (767 billion dollars) and saw a growth rate of 26.2 percent according to a report on China’s economic data by the National Bureau of Statistics. And, with over 750 million users on the internet, China is the home of both the largest and fastest growing e-commerce market in the world.

Alibaba, founded by Jack Ma, is the largest e-commerce platform in Asia and is a top 10 company in the stock market, valued at over $500 billion dollars. Alibaba offers a platform that combines eBay with Amazon, where both businesses and consumers can sell products directly to each other.

Mobile payments, the catalyst that connects everything together.

Alipay, or Zhufubao, is the leading mobile payment service in China and was also created in 2004 by none other than Jack Ma and Alibaba Group. Right behind Alipay is WeChat pay which is commanding market share fast.

When you come to China, you will see QR codes everywhere. On brochures, posters, restaurant tables, share-bikes, taxis, and even street beggars.

That’s right. Beggars on the streets of major cities like Shanghai are now showing a QR code, not on their phone, but simply on a piece of paper, and not all of them necessarily asking for money donations. Instead, these beggars will make money regardless, as the act of scanning these QR codes also allows the third-party issuer of that QR code to harvest your data and promote their business (often a company wanting to promote their product/service).

When you go to a restaurant, you can scan the QR codes on the corner of the table and it will immediately bring up the online-menu version for the restaurant, which you can optionally choose to order AND pay directly through your phone if you don’t want to deal with interacting with the servers and physical menus.

Share-bikes will have QR codes on them so you can scan and pay to unlock the myriad of bikes on the streets.

Want to pay your friends back for splitting a bill? Alipay or WeChat pay. Trying to make new friends in China? Try the pickup line: “should I scan you, or should you scan me?”

I’ve never seen such a complete revolution and domination by two companies. Over 50% of all mobile payments are done through Alipay, and Alibaba owns a majority market share in the e-commerce market.

Tencent, the creators of WeChat and WeChat pay, owns roughly 37% of the mobile payment market, but also has over 1 billion monthly active users on their killer app, “WeChat.”

QR codes are the backbone of China’s technological movement. Your QR code is your digital identity. It connects to your WeChat (social media), personal info, bank, payment service, online shopping service, and everything in between.

So grab your smartphone, sign up for WeChat, share your QR codes, purchase something on Alibaba, hope on a bike laying on the street, and travel all of China on a 350km/hour train. It’s a revolution happening over here…

If you have more questions, please feel free to reach out. I will gladly help you with any concerns, and we can hop on a call/chat if you want.

I am not a professional financial advisor or planner as much as I’d like to be. All thoughts on the DTF Website are strictly my opinions unless otherwise stated or sourced. I understand there may be errors in my writing. My articles are not meant to be offered as professional advice, as I am currently learning a lot about finance myself. Please always do your own research and due diligence when it comes to financial decisions. Money is very important! I may own some stocks discussed in this article.