Skip to content
October is not only just a scary month for those that celebrate Halloween, but historically is feared by market investors. This month is no exception; as we near Halloween, the S&P 500 has fallen nearly 9% in October alone. The recent market correction this month has sent everyone into a frenzy in the stock market. Below I’d just like to list some potential factors that may have instigated/provoked/propelled this stock market correction, all which cause “uneasiness.”

Midterm elections are just around the corner. The markets don’t like events that cause uneasiness and unpredictable effects. Will the Republicans lose the house?

In basic macroeconomic terms, when interest rates go up, lending and credit are squeezed, which in theory leads to less business and cash flow.
The Federal Reserve announced 3 interest rate hikes for 2018 and proceeded to follow their plan of action.
The current Fed Chair, Jerome Powell, is also coined as a “Monetary Hawk,” which is someone who favors tightening monetary policy and low inflation, thus higher interest rates. This again might cause uneasiness in the markets because these interest rate hikes may be an indication of a contraction in the economy.

On Oct 3rd, the yield on benchmark U.S. 10-year Treasury Note gained 11 basis points to reach 3.166%, its highest since July 2011. The 30-year Treasury Note’s yield also advanced 12 basis point at 3.327%, marking its highest in 4 years. Furthermore, the yield on 2-year Treasury Note reached 2.864%, its highest since June 2008.
The more attractive bonds become, the less attractive stocks are. Bonds are generally safer but generally offer less return. When bonds become safe + offer a higher return, stocks look bad.
Imagine if a US government bond had a coupon rate of 10% (which is unheard of, for a reason). Well, why the hell would anyone invest in the stock market then, unless the annual return rate of the market was greater than the bonds? (Which, in this case, we know that the market annually returns ~10% in the long term).
Investors in stocks get uneasy when Treasury notes become more attractive.

“We are in the 7th inning of this economic expansion” —Ray Dalio
Well, I think he is pretty accurate. We are in the longest bull market ever. It can’t go on forever… Is the economy overheating? Right now, the S&P is at historically high valuations, with the Shiller P/E ratio is sitting at around ~30, while the historical average has been ~15-16.
The last recession was in 2008, and we just celebrated the 10-year anniversary of the financial crisis. TEN YEARS! Ten years is a long time, that a lot of people have almost (ALMOST) forgotten about 2008. 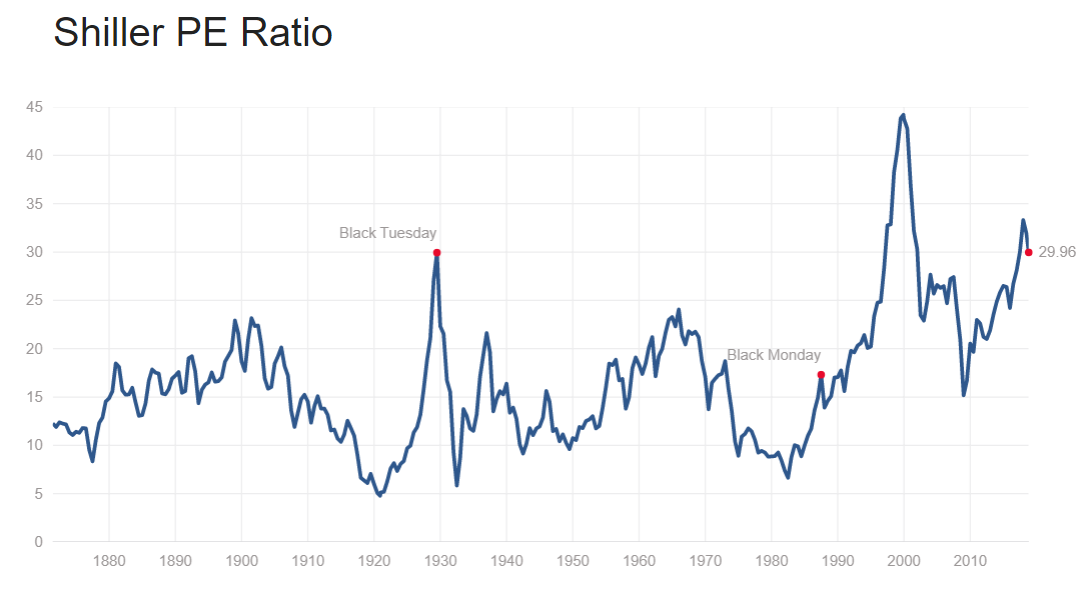 Economists everywhere are still watching this closely. The future impact could be substantial to both economies.
Although the US and China both slapped billions of dollars worth of tariffs on each other, the US and China are number 1 and 2 in the global economy, respectively, each having economies in the trillions. These tariffs are currently negligible but have caused uneasiness in the markets because the market doesn’t like to be put in a situation where the future outcome is not predictable. Some fear this trade war might evolve into something much more ugly.

Ever see a stock suddenly shoot up 100% in one day? It’s quite doubtful that companies can actually double in real value in less than a day. But as the stock jumps up 50%, other people want to continue to pile in money as quickly as possible to maybe catch some of those sweet gains in the short-term, thus driving up the price of the stock even further. You’ve probably been tempted to buy in on a stock before like this. I’ve done this before too, but greed is a great lesson (Bitcoin anyone???).
The instigator of the initial stock price jump of a company may be numerous reasons (announcement, new innovation, potential rumors, good earnings reports, etc), but the further driver of the stocks price increase is mainly caused by the momentum of investors piling in the capital, all due to investor psychology and sentiment. Optimism is high.
But just as momentum can carry a stock upwards, gravity will pull stocks down, but much much faster. Pessimism is compounded on top of pessimism, and share prices are further driven down by investor psychology to panic or cut losses.
Humans are natural conformists. Some traders take advantage of this and try to “ride the swings” up or down during market cycles. (Momentum traders).

At the end of the day, the market moves in cycles. We’ll have expansions, and then inevitably, we will have recessions. But here is the important aspect: the economy and the market is a cycle. So, when the markets drop and pessimism is at an all-time high, that generally offers the best margin of safety for investments. In 2008, in the midst of the housing crisis, despite it being one of the worst times for the American economy, it also provided the best opportunity to enter the housing market as well as purchase certain stocks at bargain low prices. It’s very difficult to do this, obviously, because you’d be betting against the crowd. But time and time again, it’s often best to go against the crowd if you want above average performance.

Hopefully, this market selloff isn’t going to lead into the next recession. Hopefully, once this month is over, we can all forget about how scary Octobers are us stock market investors.

Finally, I leave you with this satirical tweet on why you should really never try to act as if you are clairvoyant. None of us can predict the future (even though I tried to provide reasons for this market drop myself). 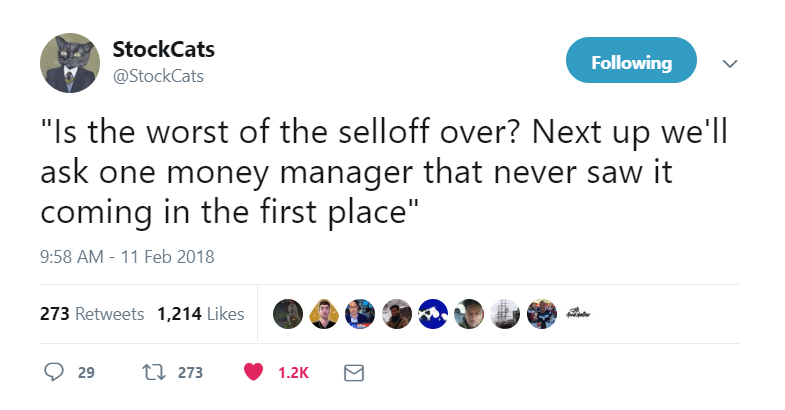 One thought on “Spooky October for the Markets”