On June 16th, over 2 million of the 7.3 million Hong Kong population turned out in demonstration against the China Extradition bill as well as the recent police brutality during previous demonstrations, a day after Carrie Lam, Hong Kong’s Chief Executive, placed a pause on the passage of the bill. That ratio is crazy: 2/7. I cannot even imagine 100 million Americans showing up to protest something.

In the month of June 2019, there were 7 demonstrations held by Hong Kong residents in opposition to the China Extradition Bill.

But the first part of this article isn’t about the protests about the bill. First, I want to discuss how tea was the primary reason Britain started the opium wars that got Hong Kong into this “One Country Two Systems” situation with China in the first place.

In the mid-18-century, Britain started trading with the largest economy in the world: China.

China had a lot to offer the West, including silk, porcelain, but what particularly intrigued the British was tea. But the British, despite being the most advanced economy at the time, had little to offer the Chinese besides silver. Britain quickly went into a trade deficit with China, and their silver reserves were running out quickly. Meanwhile, although the Chinese were happy giving up tea for silver, the trade was unsustainable. 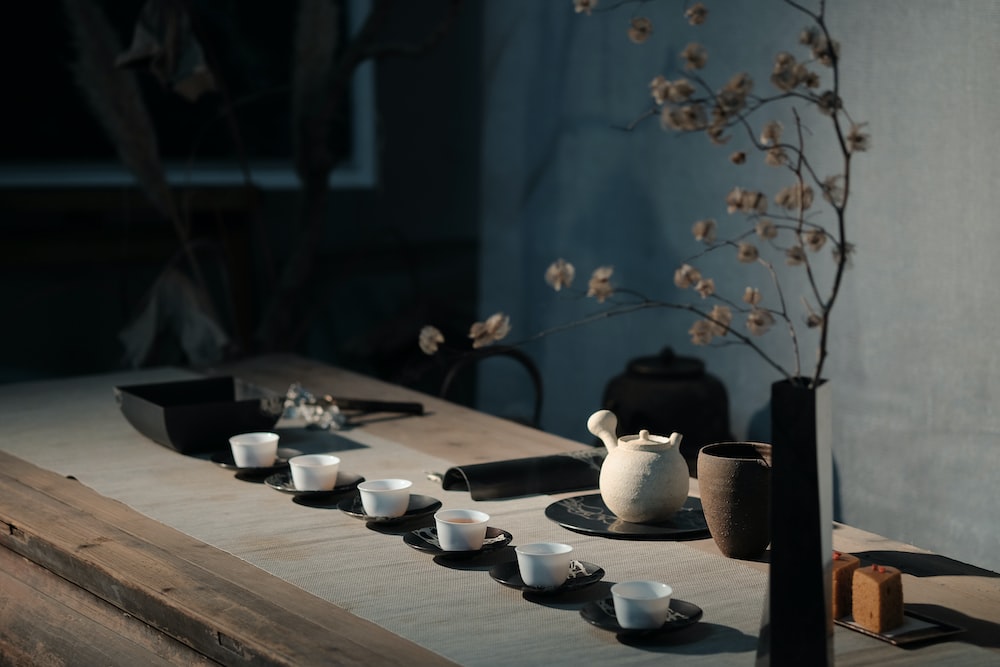 Britain, knowing this, had to find a solution. And the solution was opium.

Having colonized India, the British would smuggle opium from India to the southern ports of China, trading in carts of opium for silver bars, and then subsequently would use those silver bars to purchase more tea from China. Diabolical–and brilliant at the same time–to say the least.

Of course, the Chinese Emperor did not like seeing his country become addicted to opium in masses and passed several decrees and edicts against opium all in vain. By 1833, over 30,000 chests of opium were being trafficked into China. Thus, China attempted to stop the trade and block foreign companies by force, to which Britain responded by employing the Royal Navy, which, at the time, was unprecedentedly the most powerful navy in the world, decisively defeating the Chinese empire.

And when I mean decisively defeated, I mean that the Chinese literally had no chance against the British.

Thus, the war ended with the Treaty of Nanjing in 1842, forcing China to give up Hong Kong Island and the surrounding smaller Island to the United Kingdom, while also a payment of 21 million dollars, 6 million paid up front, and the rest in several installments.

But when Hong Kong became a British Colony after the first opium wars (1839-1842), the island was only populated by a few thousand people and was described as essentially uninhabited. Now Hong Kong is a world financial hub and one of the most advanced cities in Asia. 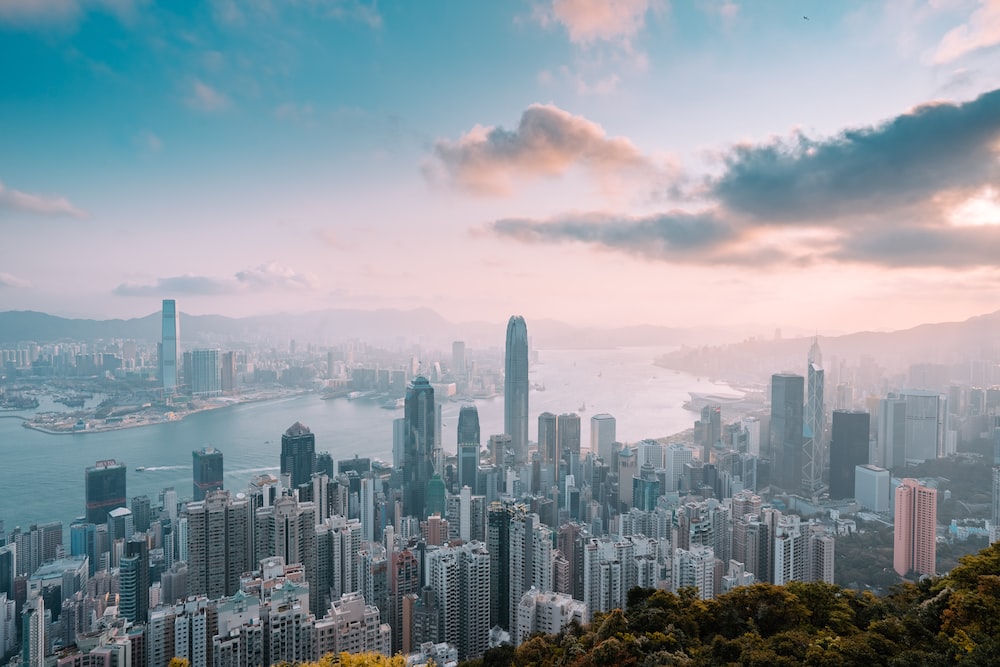 It was finally in 1898 that The Hong Kong official lease was signed by Beijing and Britain, giving Britain full jurisdiction over Hong Kong for the next 99 years. Hilariously enough, the British diplomat who signed the agreement was quoted to had stated that “99-years was practically forever.”

In 1985, the Sino-British Joint Declaration was signed to prepare the details of the return of Hong Kong back to China in 1997, because unfortunately for Britain, 99 years is not forever.

Forward 99-years into the future and it is July 1st, 1997, dubbed “the handover” of Hong Kong back to China, but under special conditions labeled “One Country Two Systems” discussed in the declaration.

Under One Country Two Systems, Hong Kong would remain unchanged for another 50 years (till 2047) and could retain their economic and political systems, notably:

So there you have it. Tea. This is why “China” has so much weight to it: does it include Hong Kong, Macau, Taiwan, etc? This is why Hong Kongers drive on the left side of the road. This is why Hong Kong looks like Asia but feels like Britain. And that is how Britain essentially started the opium wars that allowed them to colonize Hong Kong and also began the “Century of Humiliation” for China.

So in 1997, Hong Kong was handed by to China under the “One Country Two Systems” declaration that would allow Hong Kong to remain independent from Beijing until 2047. However, it is 2019, and China doesn’t want to wait until then.

If you’ve followed the news, you’ll know that in the past few months, we’ve seen several demonstrations by Hong Kong people in opposition of a recent China Extradition Bill that would give Beijing more power over Hong Kong people, who see this Bill as another act by China to slowly strip away the Island’s independence.

So What Exactly is this Bill?

It all started when a Hong Kong couple last year in February 2018 went to Taiwan for vacation. However, Chan Tong-Kai allegedly killed his pregnant girlfriend, Poon Hiu-Wing, in Taiwan, and then fled back to Hong Kong. Chan admitted to the murder of his girlfriend, but Hong Kong police were unable to charge him for murder (because it occurred in Taiwan and HK has no jurisdiction there), but they were neither able to extradite him to Taiwan because no agreement between HK-Taiwan is in place.

So now we have this legal loophole.

Thus, in February 2019, Hong Kong government proposed this formal extradition bill. But the issue is Taiwan is also considered part of China, and the same bill would allow extradition to mainland China, giving Beijing even more power over Hong Kong.

Because in mainland China, if the government doesn’t like you, they can essentially create up any excuse and have you tried and found guilty for anything. The authoritarian state has all the power.

Although this isn’t the first Hong Kong protest against China, this has been the largest.

On June 16th, the largest protest, over 2 million of the 7.3 million population showed up in demonstration. We’ve seen over 7 demonstrations since June, and after such large demonstrations, the bill was paused by Carrie Lam, Hong Kong’s Chief Executive (who is selected by Beijing). However, Hong Kong people are also asking Lam to step down as Chief Executive and want the bill to be completely eliminated rather than amended.

At the forefront of these protests are young people, who are fighting for their own future, and are the first generations born under the “One Country Two Systems” decree post-1997.

Prior to the handover of Hong Kong from Britain to Mainland China, Hong Kong’s GDP was 17% of China in 1997. Now it is down to 3%, competing against a rising Shanghai and Shenzhen. 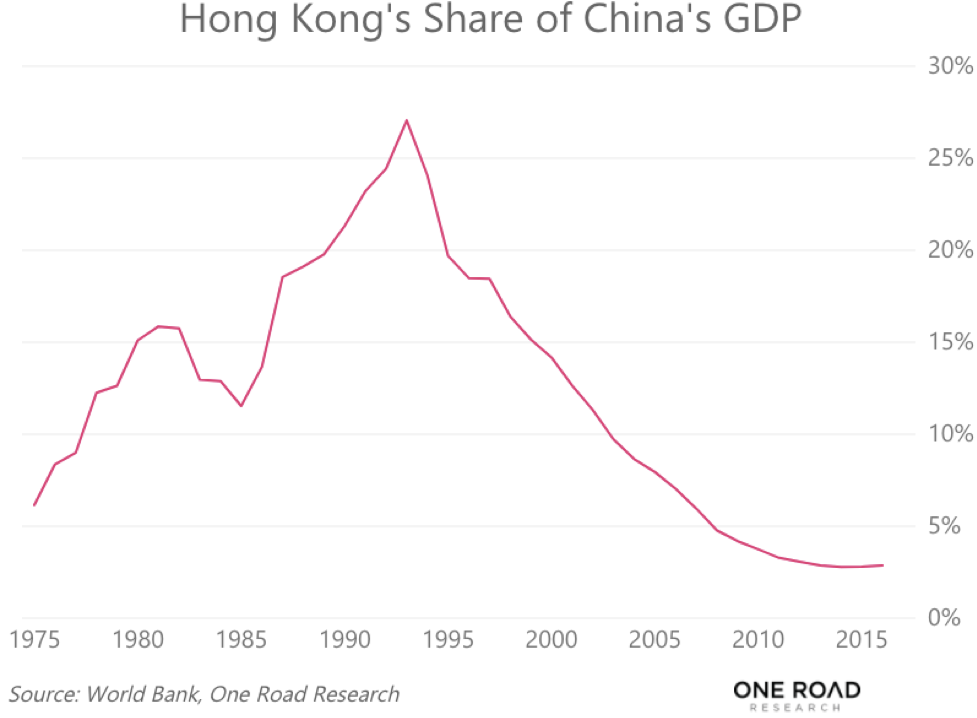 Hong Kong has long been seen as a global city that is strategically one of the best locations for a Western company to enter the China-Asia market. This is because Hong Kong is part of China but has free markets and democracy, allowing businesses to more easily access China markets without the heavy oversight of the Chinese state.

But now Hong Kong is losing its dominant position to other Chinese port cities.

Shanghai’s nominal GDP has surpassed Hong Kong, with Shenzhen quickly catching up (See Figure 1). While Hong Kong’s GDP per capita (per person) is still relatively higher than the rest of China, the three important China ports, Shanghai, Shenzhen, and Ningbo are catching up in that race too (See Figure 2).

People often say that Shanghai is modeled after Hong Kong, and they’re not far off. If you visit both cities, you’ll see that both have beautiful skylines of tall skyscrapers.

But you’ll notice one thing right away. Shanghai is much newer.

The Shanghai Bund looks like something out of a movie, with tall shopping malls, the Oriental Pearl Tower (Needle), The Shanghai Tower which is the 2nd largest building in the world, and beautiful hotels.

Shanghai is a direct challenge against Hong Kong as a global financial hub in Asia. At one point, the contest was between Singapore and Hong Kong as British colonies with access to China markets. But China is making it quite clear that if Western countries are looking for a global financial hub city to access Chinese markets, then you simply need to look at mainland China.

On the global stage, mainland China’s two stock exchanges in Shanghai and Shenzhen both rank in the top 10, with Shanghai recently surpassing the Hong Kong stock exchange in total market cap.

The Future of Hong Kong

Hong Kongers will continue to fight against the influence of China, and my support is with them.

Taiwan is equally in the same independence fight, as are many other regions of China.

On the most recent protest on July 1st, Hong Kong’s Independence day, I had seen both Taiwan flags and Hong Kong flags raised in the march. Although many of the protests have been peaceful, on the July 1st protest, individuals broke into the Legislative Council building in Hong Kong.

Just today [July 9th], reports came out that Chief Executive Carrie Lam has said the government’s controversial extradition law proposal is “dead,” but she stopped short of withdrawing it entirely.

China will not back down easily. The state is known for demonstrating their power based on how strong and far of a reach their influence is. And Xi Jinping will not hesitate to assert his dominance.

I am fortunate enough to be in Hong Kong in such a historically important time, as well as witness the gathering of hundreds of thousands of people who have a common shared goal to fight for their collective freedom. As this is not my fight, I have remained on the sidelines and reflected on this through my writing.

I can only hope that the future of Hong Kong is bright for the sake of its people.

Hong Kong is set to be returned to China fully by 2047; it is 2019, and Hong Kong continues to fight for its independence against Beijing.